There is little question that Headington Companies—which has interests in industries spanning oil and gas to film production, restaurants, and retail—has revitalized Dallas’ urban core, transforming it into a cool, cultural playground. Behind some of the city’s most contemporary projects such as The Joule Hotel, formerly a 1920s neo-Gothic bank building, and some of the best restaurants, Headington Cos. is transforming the city one historic building at a time. “Our goal with The Drakestone is to create experiences and settings that don’t exist in the suburbs,” says Headington Cos. Michael Tregoning. “The building is situated in a uniquely urban environment with historical and modern influences that make it unlike anything else in the city.”

It makes sense then that the company’s latest project, the transformation of the 1926-built, 20-story high-rise Davis Building, offers nothing short of an experience upon entry. Now The Drakestone luxury apartments, the long list of amenities spans a 24-hour concierge to a rooftop grotto pool, conservatory, private cupola, and panoramic downtown Dallas views. As with all of the company’s properties, the design of The Drakestone was approached with an avant-garde sensibility—an aesthetic intended to meticulously thread from the Classic Revival building’s original architectural details to every sofa, rug, light fixture, and artwork. 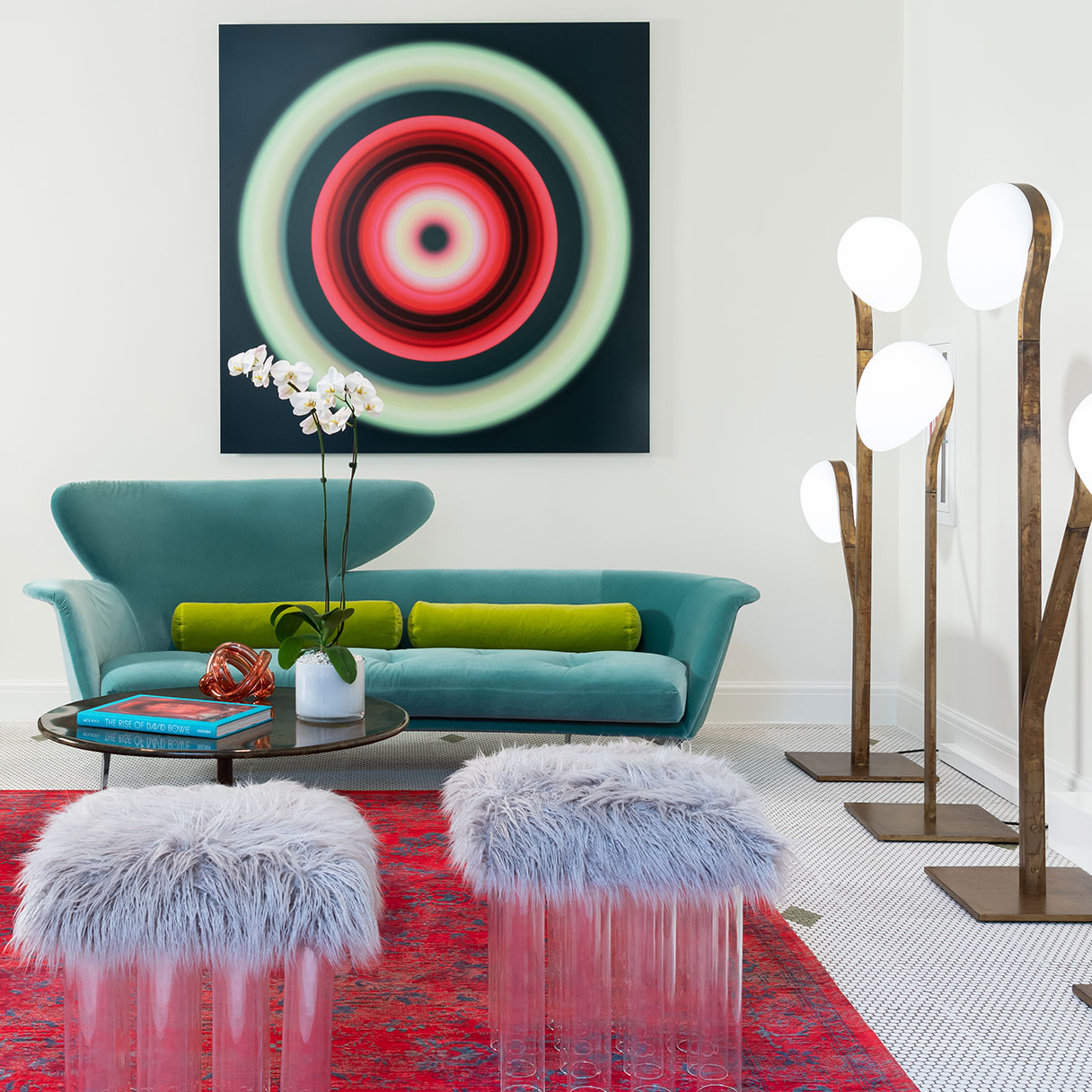 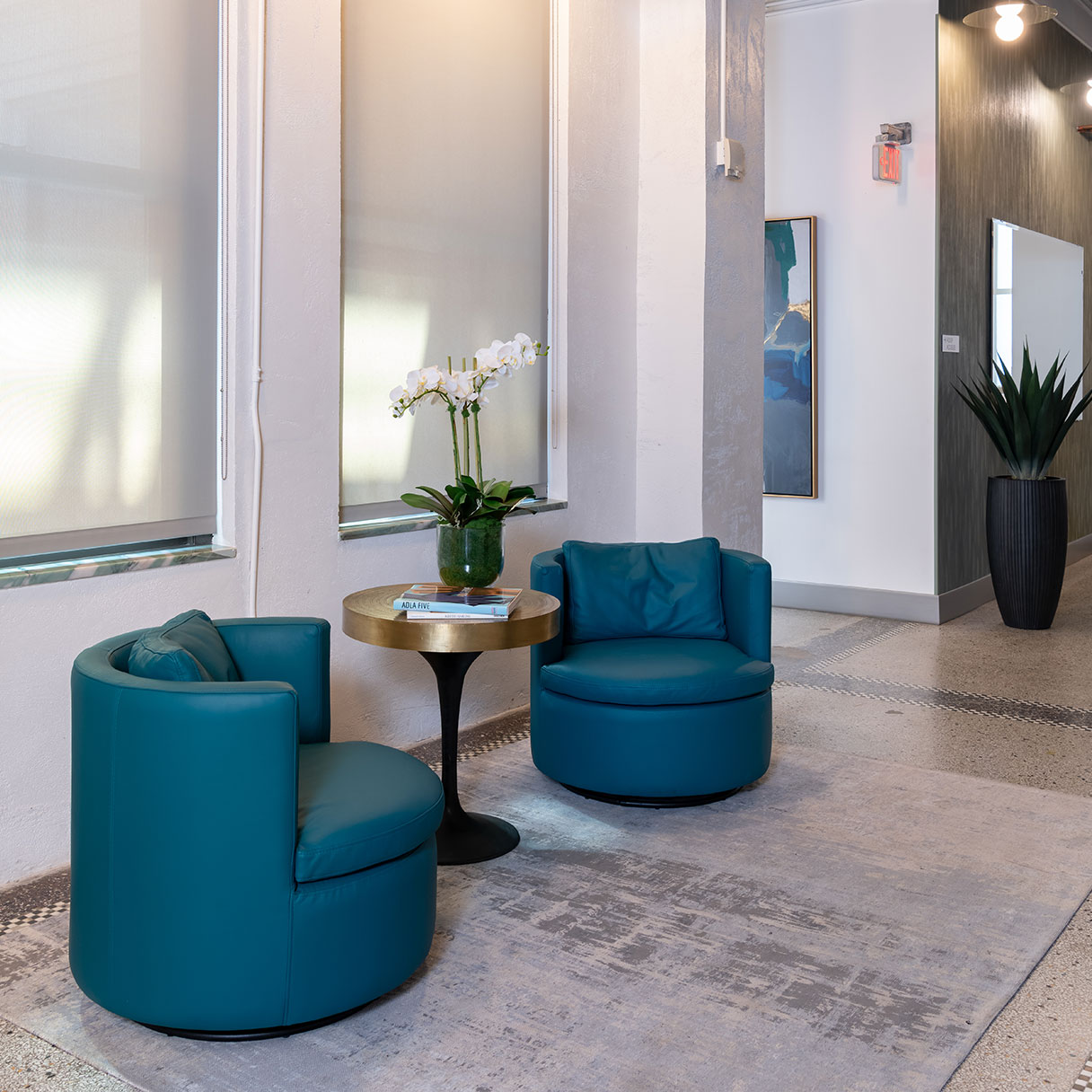 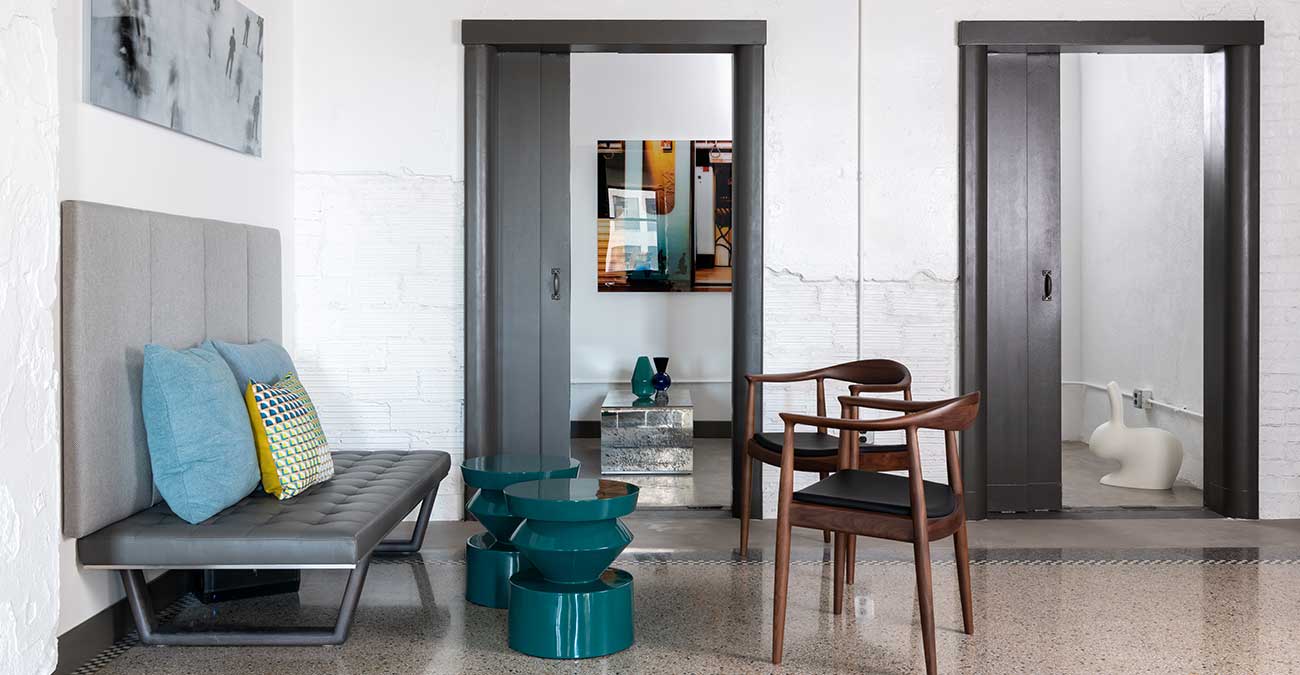 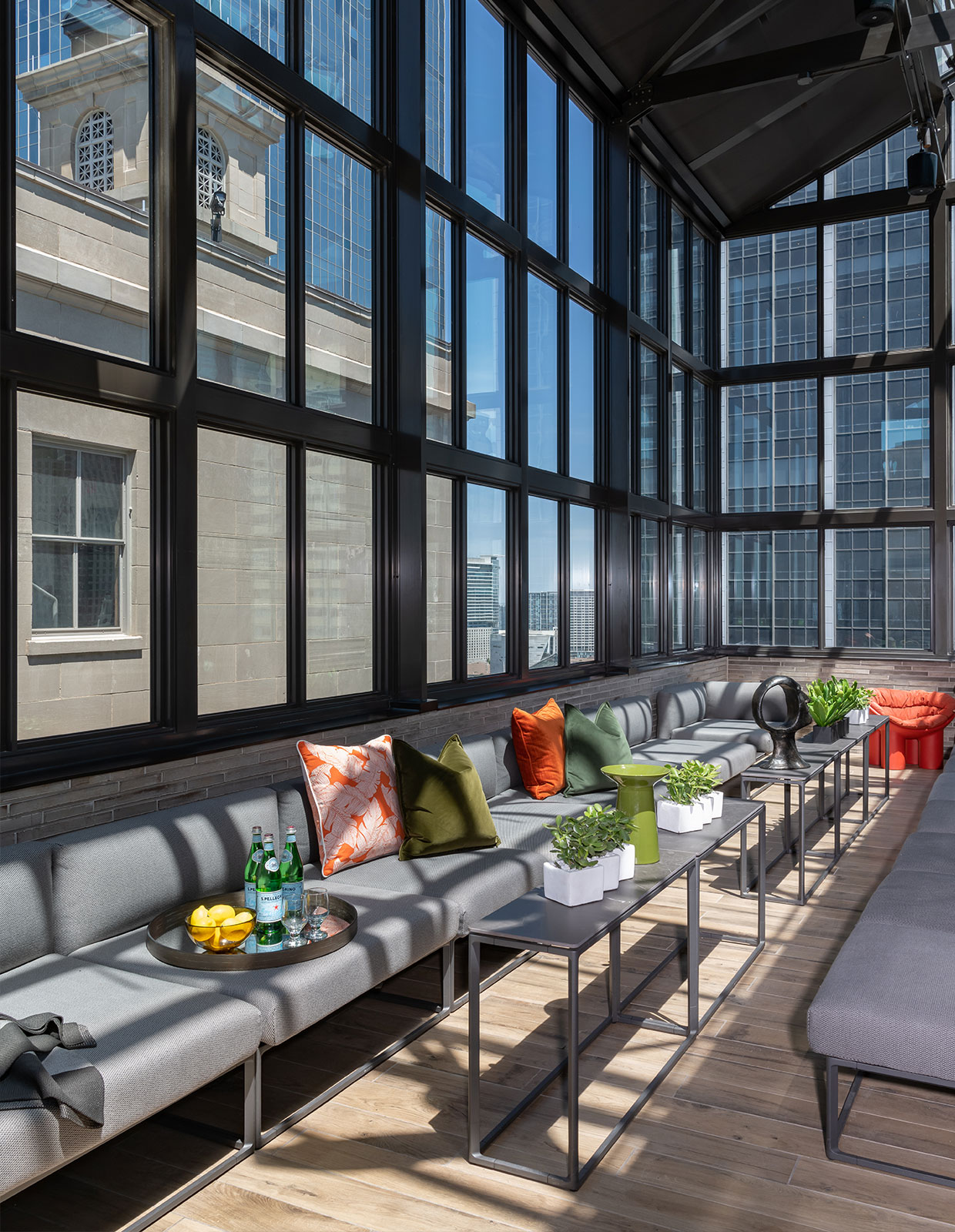 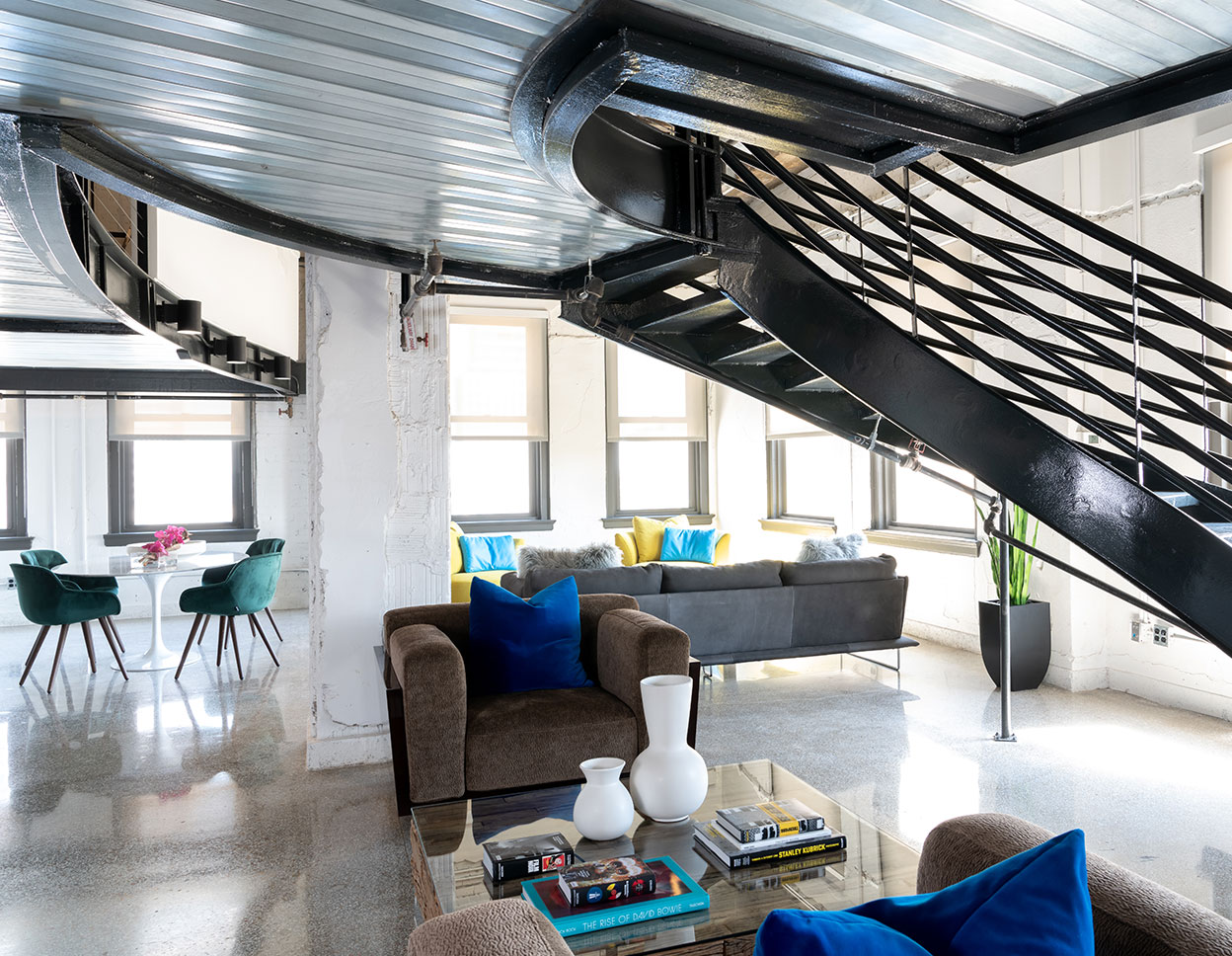 Headington Cos. and Cantoni have collaborated for many years, on both residential and commercial projects. “Cantoni has always been our first choice for high-quality, beautifully curated, contemporary furnishings,” Michael says. Cantoni interior designer Nicole George, who is no stranger to high-profile projects, knew the vibe he was after. “Michael is extremely creative and thinks out-of-the-box,” Nicole says. “He wanted to take an unconventional but strategic approach, encouraging ingenuity while following a clear concept.”

From terrazzo floors to exposed raw brick, traits of the city landmark, which was originally built for Republic National Bank, were left intact, while period-appropriate details, such as column detailing and penny tiles, were added—a careful blend of restoration and preservation. “These elements dictated how things were balanced,” Nicole says.

Nicole sourced all furnishings, rugs, and most light fixtures from Cantoni’s vast collection. She leaned heavily on statement pieces with art deco and modern Memphis influences. Case in point: the graphic black-and-white Ziqqurat armoire and gem-cut, smoked mirror Yanin tables. Nearly every piece was customized to layer texture—velvets abound, such as in the cinnabar Windsor chesterfield sofa and the low-slung Bla chairs in Cobalt. Antique Italian glass chandeliers halo over the seating area. And yes, that’s a wavy undulated ceiling, crafted of white concrete gesso—an element that delivers Headington Cos.’ trademark “wow” factor.

As with each of the company’s projects, dramatic art played an integral role. A collage on canvas of the Flaming Lips from Headington Cos. owner Tim Headington’s private art collection was purposefully hung opposite the monolithic Cupola sculpture. Nicole complemented the work with an analogous green wool Nuance chair. Lucite stools with Icelandic grey sheepskin float on an overdyed Grinder Belgian rug and juxtapose the Lovy teal sofa customized for this project from Italy. The six-foot Moon chairs in shadow gray velvet give accolade to the Sean Townley sculpture that was strategically installed before the lobby window of The Drakestone. Molten brass, almost terrestrial Tree Lights add dimension to the otherworldly effect. “Each piece could be bold on its own—it’s very much an orchestra, the way they work together,” Nicole says. “One piece doesn’t outshine or pull from another.

In the 20th floor grand penthouse, one of three spectacular model units furnished by Cantoni, Nicole was equally purposeful with her selections, pairing pieces that emulated the lobby’s vibe. Center stage under the black steel stairwell, the Malerba Dress Code club chairs were veneered in African karoo wood, and lend a formality to the cocktail table made of railroad ties and polished steel. The emerald velvet Igloo dining chairs at the Saarinen style Tulip table even have an art deco lean. The nesting accent tables in Zinnia and lemon also were intentional. “Saturation of color is a theme you see throughout the entire building,” Nicole says. “We wanted this vibrancy to front the stark white walls and exposed elements."

Other pieces were chosen by Nicole simply for their intrigue, such as the Paramount sideboard with Italian blown glass doors and the limited-edition photography art on plexi acrylic. “Working with Nicole was eye-opening inasmuch as she has a passion for many design periods and styles, reflected in a deep knowledge of each,” Michael says. “Her creativity and expansive knowledge were key to our respectful marriage of contemporary expression with landmark architectural restoration."

Working with Nicole was eye-opening. Her creativity and expansive knowledge were key to our respectful marriage of contemporary expression with landmark architectural restoration.