A Cheery Townhome Gets a Splash of Color

A client needed new bar stools. She and her husband were making a big move — they had decided to sell their traditional Atlanta home and all the furniture with it — and were transitioning to a bright new contemporary townhome in Doraville, northeast of Atlanta. But the moment she began working with Cantoni design consultant Pam Satterly, it became clear she would need more than a few chairs.

“In speaking with her, I discovered the townhome had an unusual layout — the living room and dining room area are three spaces along one, continuous wall,” Pam says. “So all of the furnishings really needed to flow well — and that was a challenge.”

The two decided to divide the room into three, cohesive sections for a seamlessly functional, beautiful space that feels intentional. The one constant the homeowner wanted? Color. And an abundance of it. “She envisioned a really strong, vibrant palette,” Pam says. “Because of the elongated space, we also aimed toward a less-is-more, no clutter, clean look.” 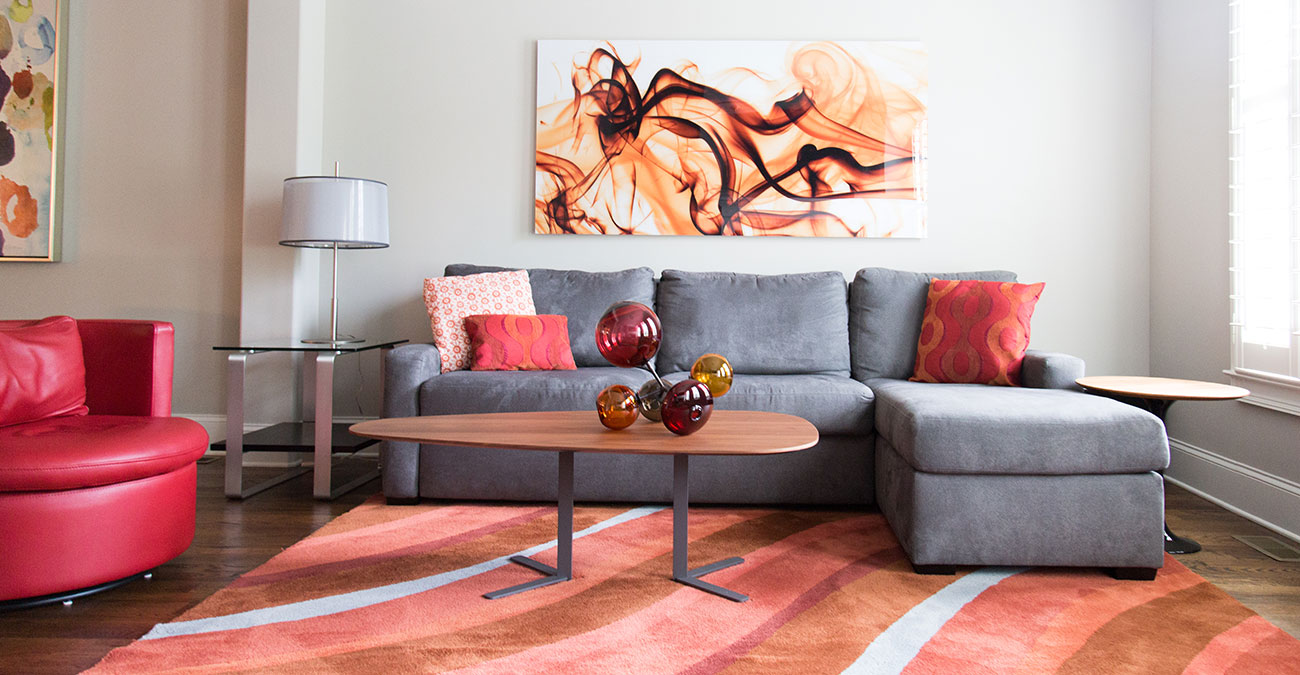 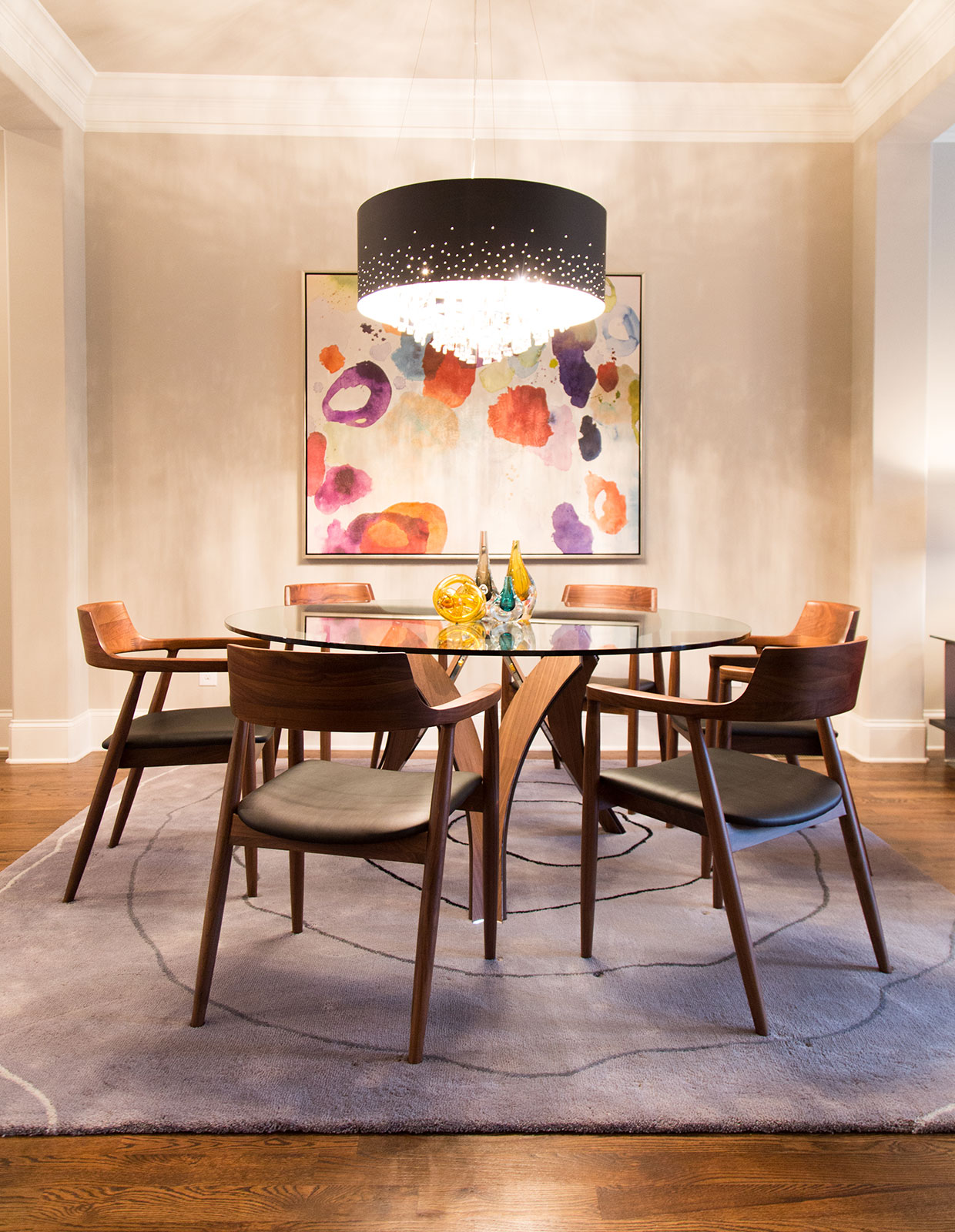 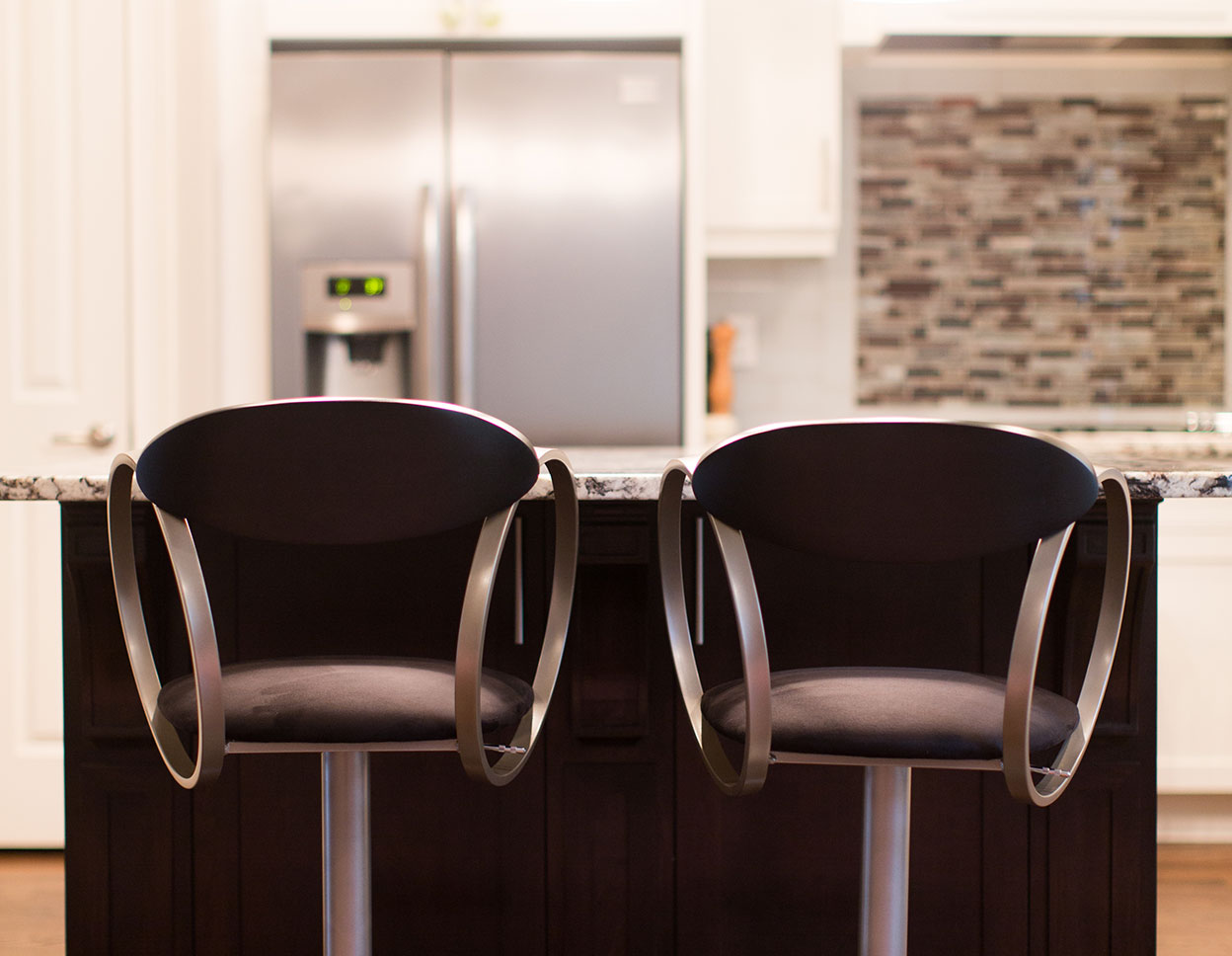 Playing off the grey paint tones on the walls, Pam started with art. She brought in two mirroring photographic prints — one in fuchsia and one in orange — set at either end of the space as color anchors. For the dining room, she selected an abstract painting that incorporated colors from both ends of the space into the center. “The art helped the couple visualize the flow,” Pam says. “They were able to see how the trio of spaces and colors would work together.”

From there, Pam brought in custom furnishings. She paired the Menlo Park sectional in light grey with several white Tulip tables, which set the tone for vibrant custom-designed rugs with bold stripes and hues. In the dining room, Pam matched a custom Cortina dining table with classic mid-century modern armchairs, set over a pretty neutral grey rug, and hung a glittering chandelier overhead. Pam added functionality and room for comfortable entertaining in the third section with a custom upholstered sectional, the Stream end table, Samba cocktail table and Saturina table lamp. And, in bringing the project full-circle, they chose the Eclipse swivel barstools in ebony suede to match the kitchen. “The space now has an abundance of energy,” Pam says. “It’s a complete breakaway from their previous home.” The client agrees. “Pam is great to work with — she’s very knowledgeable and professional,” she says. “She hears her clients’ needs, determines their style, and is able to achieve a gorgeous contemporary look that is both functional and beautiful.” And, not to mention, one with the just right amount of vivacity.

Pam was great, she’s very knowledgeable and professional. Together, we achieved a gorgeous contemporary look that is both functional and beautiful.