In a cul-de-sac tucked in a quaint neighborhood filled with old oak trees and 1950s split-levels in Charlotte, North Carolina, is a home that blends in—yet is entirely unexpected. Dark grey with floor-to-ceiling windows and raw wood siding, it is a clean-lined contemporary that beckons, starting at the exterior. “We wanted it to be inviting,” says Nancy Lopez of the home she shares with her partner, Michele Allison, “and everyone who comes into the house is amazed at how soft and inviting it is—everything is comfortable.”

Nancy and Michele spent more than a year working with a builder and architect overhauling the split-level home’s façade. But they credit longtime Cantoni designer Pam Satterly for the interiors’ sophisticated yet serene mix of modern furnishings, which are entirely different from the traditional pieces they previously owned. Though finding someone who understood the contemporary look they wanted didn’t begin easily—Michele ardently searched for modern furnishings retailers before she discovered Cantoni, about four hours from their home, in Atlanta. 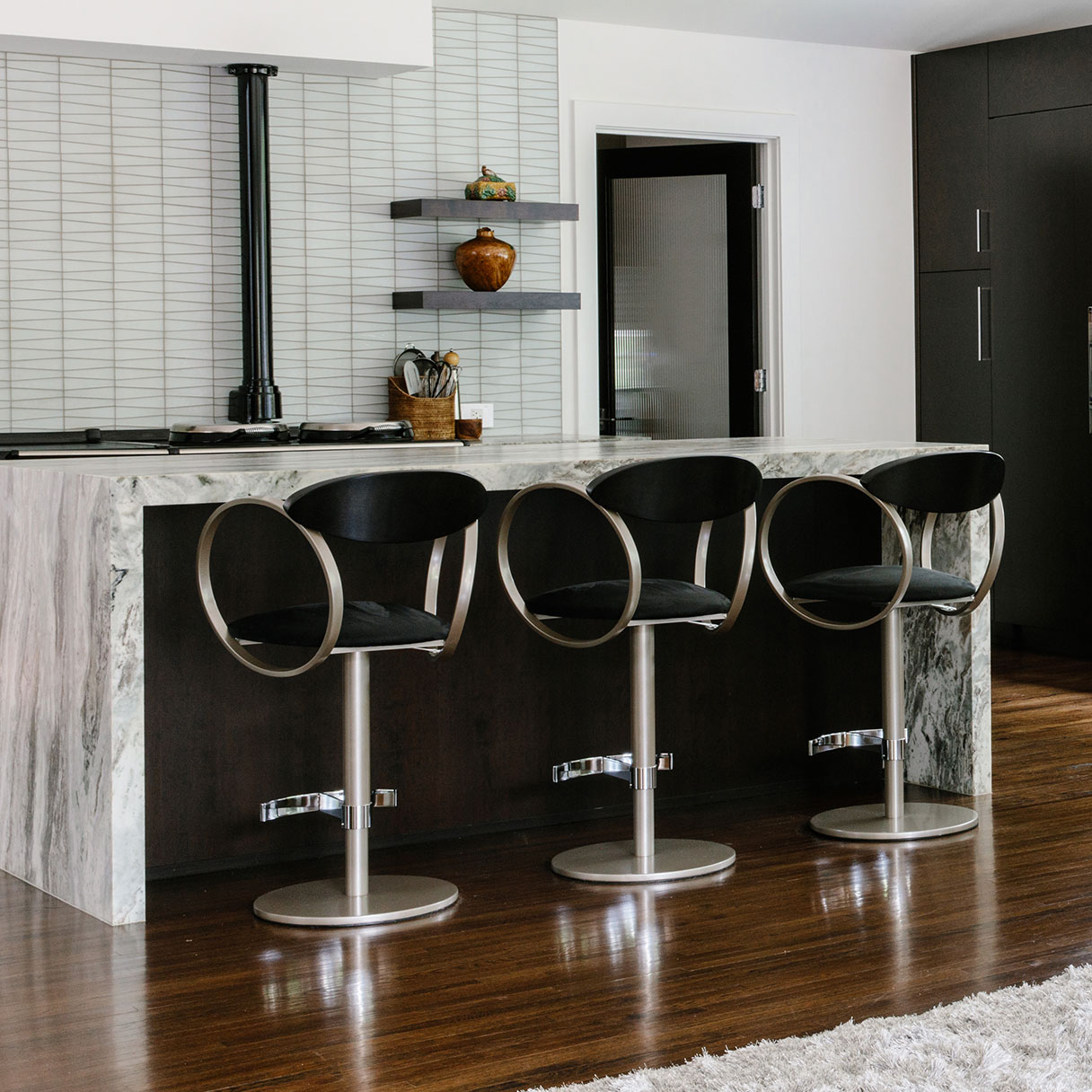 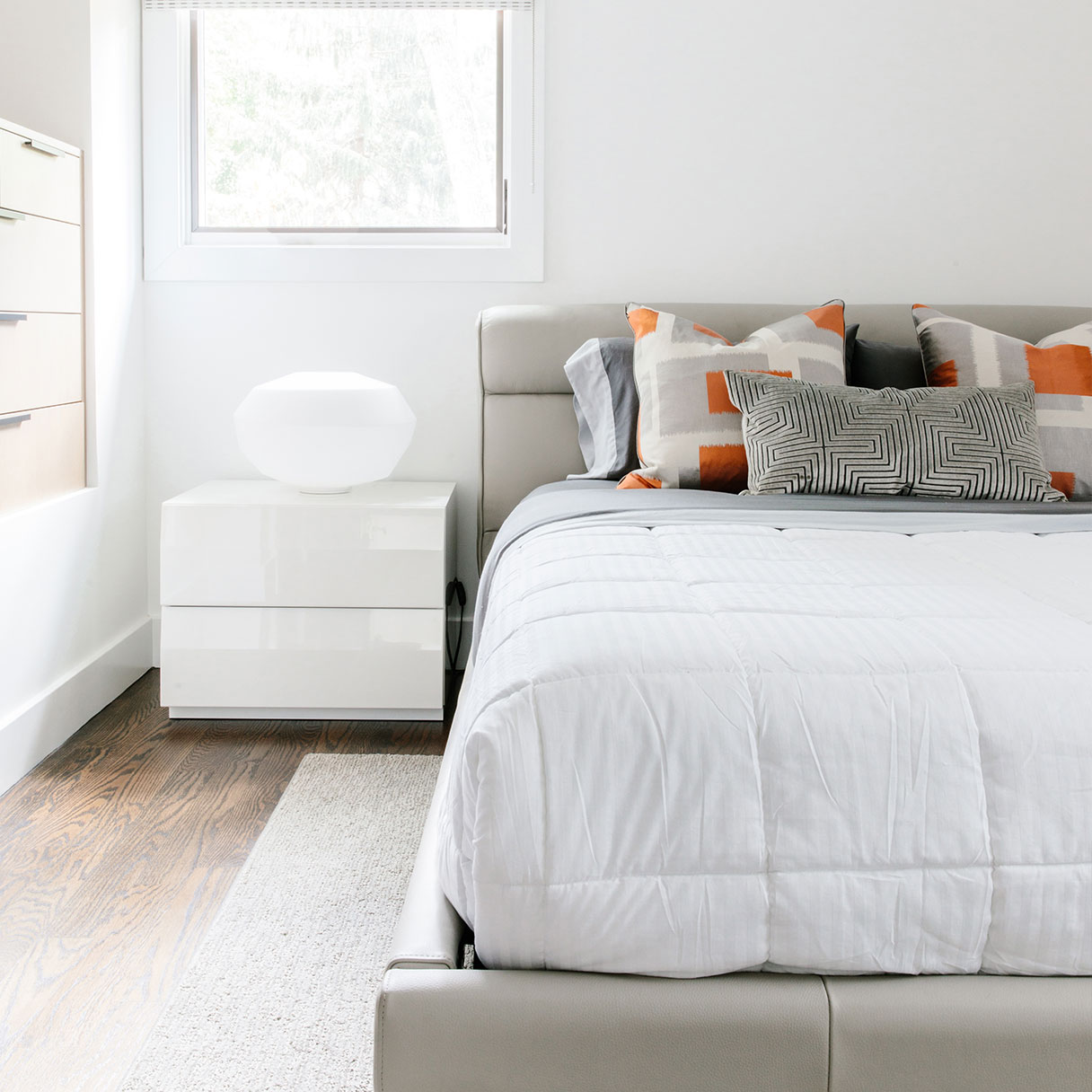 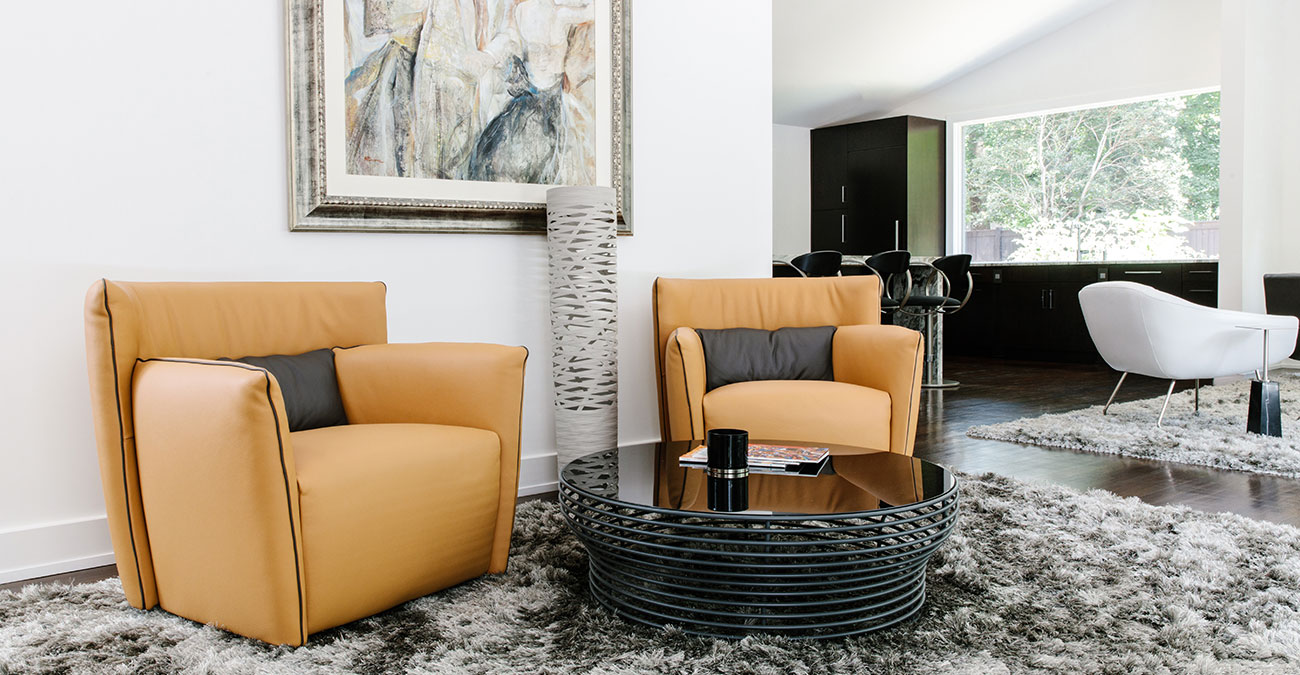 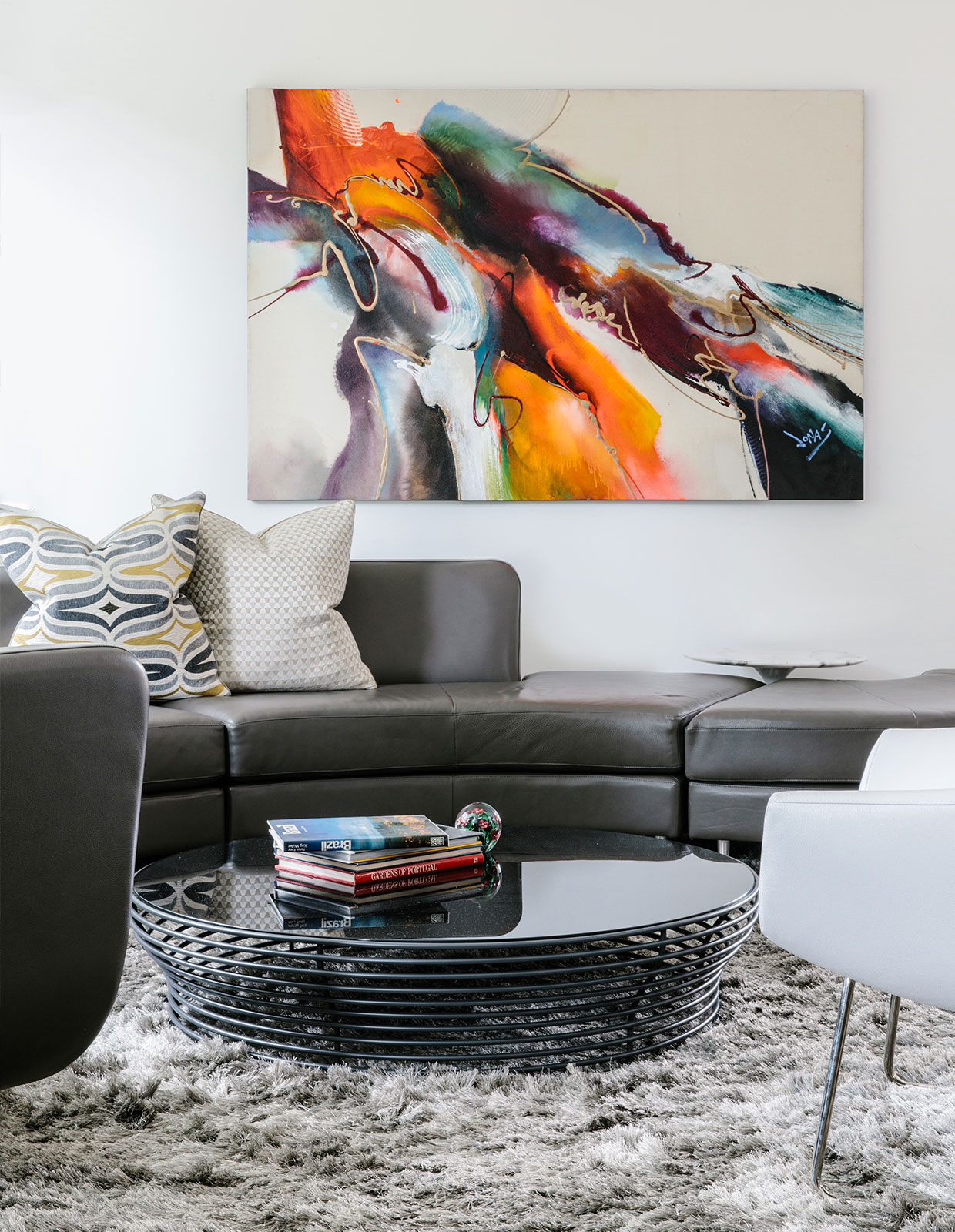 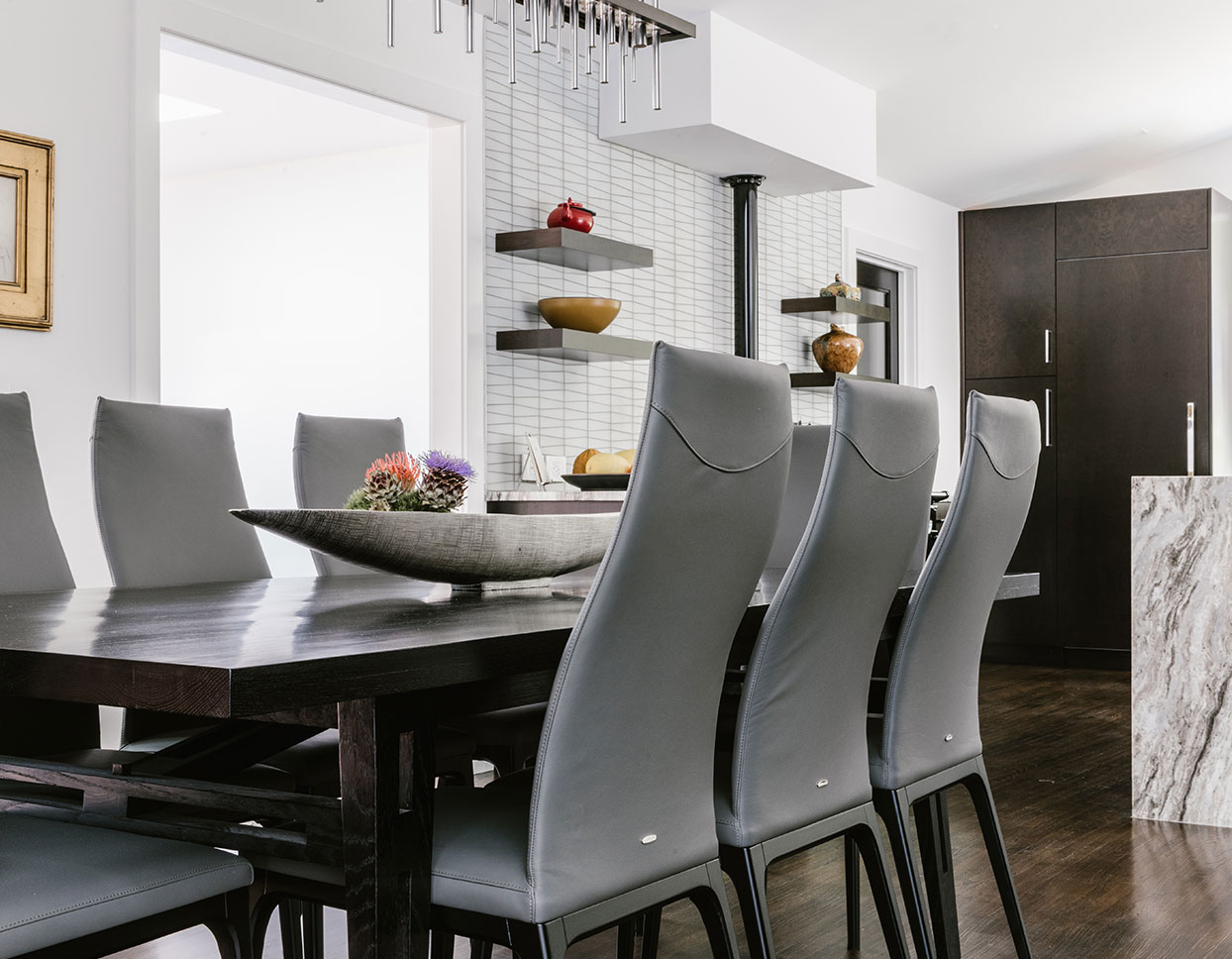 She sent an email query and Pam instantly responded. When the couple visited the store, it was clear they’d met their match. Not only did they click with Pam, but they spotted a piece they knew they wanted: the Menlo Park sectional. “I saw it and said, ‘That’s our sectional,’” Nancy says. They also pointed out the Fera Due Bianco console in red and a set of Tulip chairs. Those three choices were all Pam needed to get a feel for their style.

“From day one we clicked, and I really understood their aesthetic and what they were after,” Pam says. “They wanted their interiors to be welcoming, uncluttered, very clean, and for them to complement the architecture. They have such positive and uplifting personalities, and it was clear they wanted the mood to convey their own happiness.”

Aside from a custom dining table Nancy’s grandson had crafted, the couple needed a full range of furnishings, accessories and rugs. Their only specific request was for modern pieces that reflected hues from their expansive art collection, which includes works by both foreign and American artists. From this directive, Pam orchestrated design of the entirety of the interiors, including re-framing art when needed before determining placement. “We had so much fun together,” Pam says.

In the entry, Pam incorporated several custom pieces, including a pedestal of white marble, which she purposefully selected to hold the couple’s previously owned large geode. In the living area, she created two seating arrangements, and paired that coveted Menlo Park sectional with a Logan chair and an Orion cocktail table.

She matched the second Orion table with those Tulip chairs they spotted in the showroom, and, in the dining space, flanked the handcrafted dining table with six Arcadia high-back side chairs. “Though everything is from Cantoni, each area has its own uniqueness,” Nancy says.

The media room features the Savino sofa, the Esatta swivel chair in cognac leather, and the Hyper cocktail table. The master bedroom, meanwhile, reads plush and cozy with the Bari king-size bed and the Zodiak bench. Now, “you walk into the house and feel like you’re home,” Pam says. “It has a calming vibe to it.”

It is a true reflection of the couple. “She really got us—we love everything. She did a smashing job,” Michele says. But both say working with Pam went far beyond creating the beautiful home they wanted. “The very best part of the project is that we found a new friend in Pam,” Nancy says.

Pam really got us—we love everything. She did a smashing job!