When Florene and Jeff Bond walked into Cantoni, they had more than a few items on their wish list. The longtime Sugar Land residents were transitioning from a traditional home and furnishings to an edgier, more modern new build that traded a pool and two floors for a brighter, cleaner layout with simple elements such as slate-grey tiled floors and mint-green walls. They had gifted or donated the majority of their former furnishings and had moved into their new home with a scarce few pieces. “ We wanted a clean, classic modern look,” Florene says.

They met the Cantoni Houston design team who found the couple instantly charming. After assessing their needs and floor plan, the team gathered suggestions for all furnishings, décor, artwork and upholstery, with a goal of infusing elegance for a calming space. “They wanted their home to look sophisticated and beautiful yet comfortable,” The Cantoni design team says. “ The home’s layout is designed for entertaining, and we also wanted to accommodate their young grandchildren.”

But it wasn’t just a matter of bringing in fitting furnishings—the Bonds have strikingly different tastes. Florene leans traditional while Jeff trends contemporary. Cantoni’s designers took a fun-loving approach to striking a balance, and jokes, “we felt as though we were watching Salma Hayek and Antonio Banderas in the movie Puss in Boots. Florene did some serious compromising.” As Florene sweetly says, “I’ll have to admit my husband is the better decorator.” 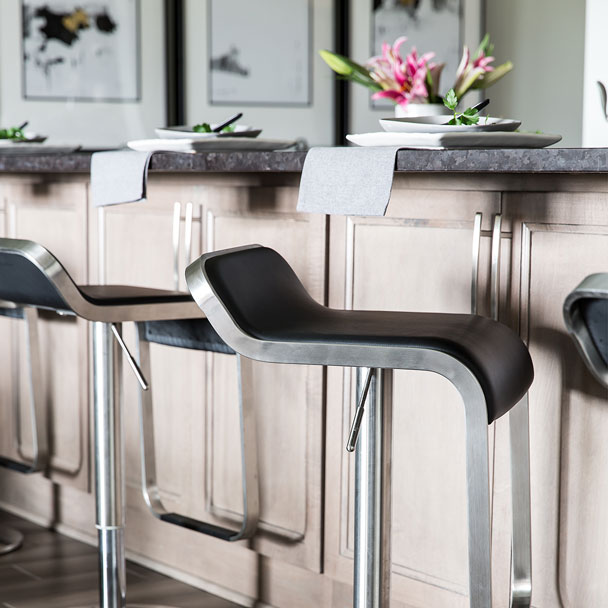 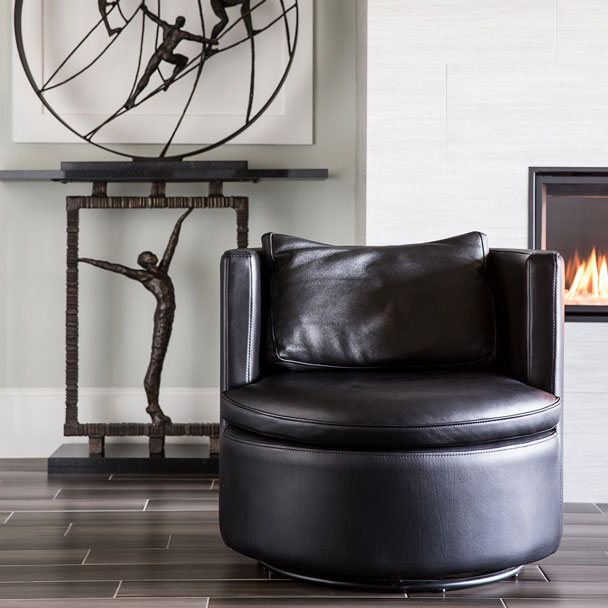 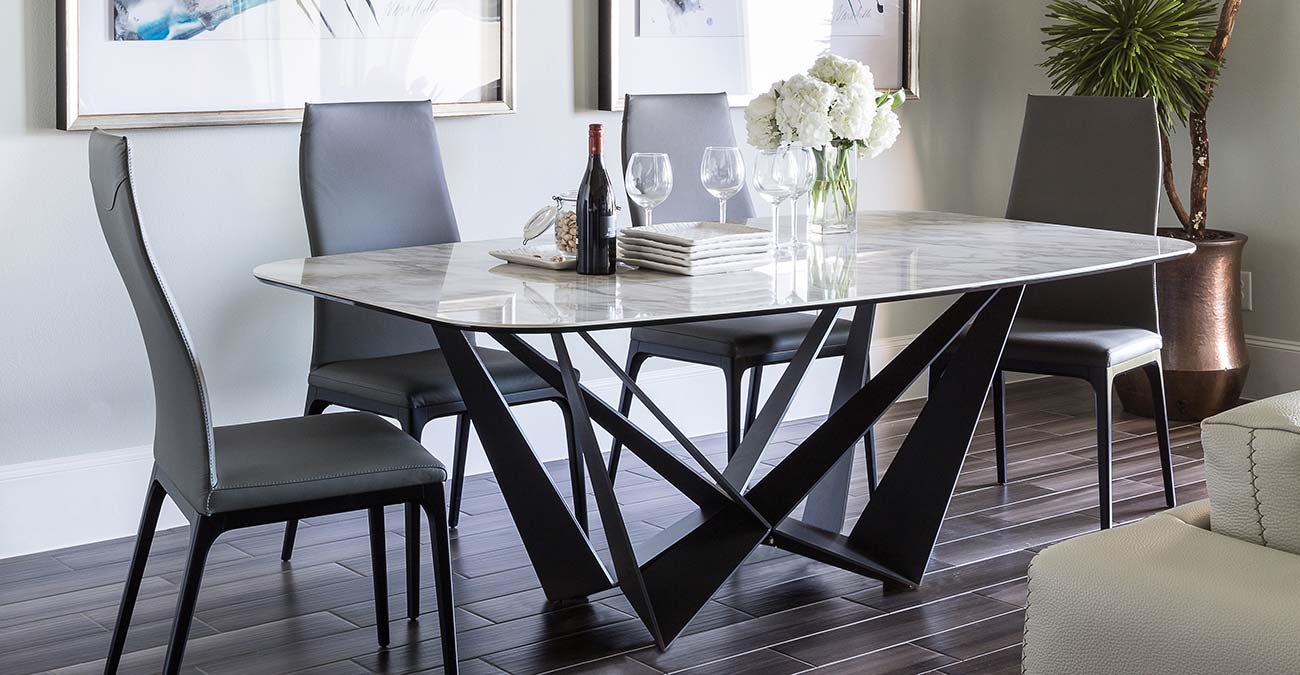 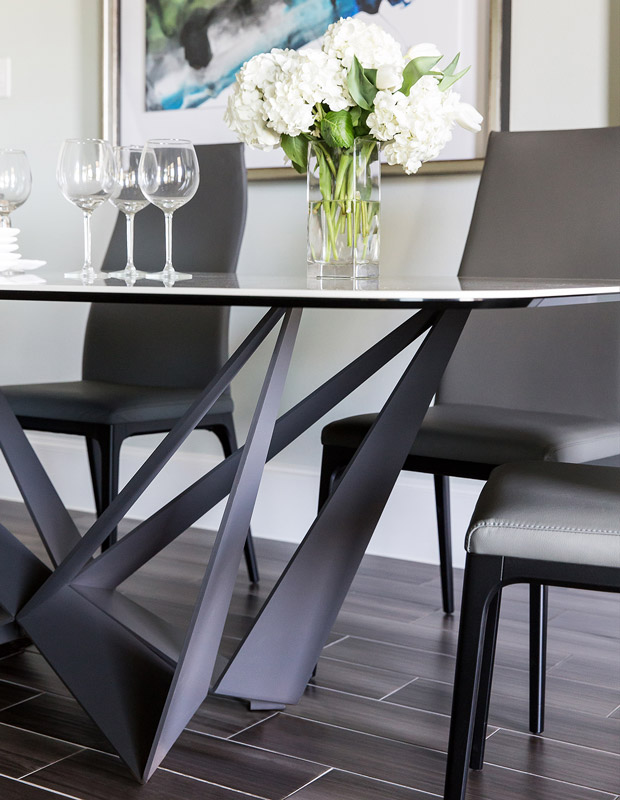 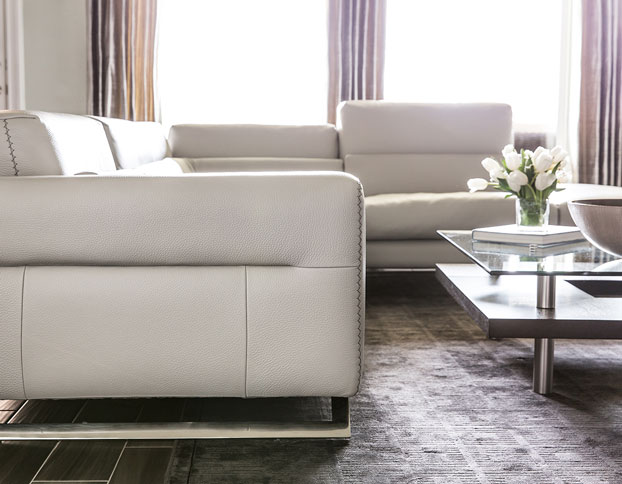 Cantoni hit a happy medium that begins in the entry with the burnt oak Westin console table designed by Giorgio Cattelan, and worked with Jeff to select a trio of paintings by artist Robert Jones—Union Square I, Union Square II and Union Square III—hung above. The console’s design is mirrored in the dining room with the burnt oak Eliot table with an embossed steel base, also designed by Giorgio Cattelan. Cantoni consistently imbued grey tones with the sleek and comfortable Bess side chairs with a graphite frame and the Viera area rug underneath.

They upped the ante in the living room with the Treviso sectional—Florene’s favorite piece—crafted in aluminum-hued Italian leather with grey cross stitching. “The Treviso created an amazing contrast against the dark ceramic floors and espresso finish on the kitchen cabinets,” Cantoni says. They brought in deeper-toned black leather Esatta swivel chairs for elegance, offset the cabinetry with Melvin bar stools, and found art that would seamlessly fit each custom nook adjacent to the fireplace.

Glamour is the key word for the breakfast room, which boasts colorful limited-edition No Boundaries I and No Boundaries II artworks by artist N. Millan over the Skorpio Keramik dining table, which was custom-sized to fit and crafted of a durable ceramic top resembling the beauty of Calacatta marble for visiting guests. Arcadia high-back side chairs make for easy cleanup in smoky grey leather, and the Oxygen 10-light pendant serves as a glittering focal point. “It was a pleasure working with Cantoni—they were very professional and had many great suggestions,” Florene says. “We look forward to having Cantoni as our designer in the future and recommending Cantoni to our friends.”

Cantoni’s design team echoes Florene’s sentiments. “The Bonds have an excellent sense of style,” Cantoni says. “They were willing to go outside their comfort zone and eliminate existing furnishings to create a cozy but formal and inviting environment that lends itself better to the architecture of their new home.”

It was a pleasure working with Cantoni—they were very professional and had great suggestions. We look forward to having them help us in the future and recommending Cantoni to friends.